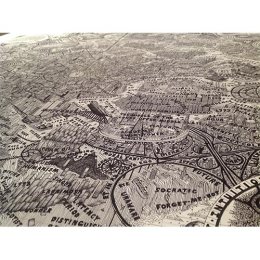 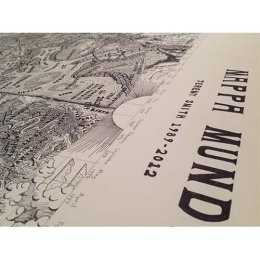 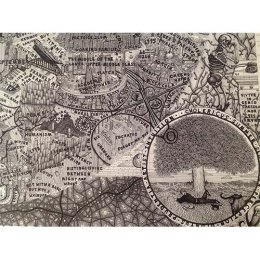 By mapping other people’s subconscious self through a psychological questionnaire I am able to create a large self-portrait, revealing my ‘self’ through others. This involves exploring the use of ‘imaginative empathy’ in art. An important aspect of art is found in its ability to produce empathy. By interviewing a series of people, the map creates a portrait and a psychological landscape of multiple consciousnesses which highlights the universality of the human condition. By exploring this commonality, the map argues that despite our diverse backgrounds, histories and ethnicities, at our core is a common connection to one another.
[/i]
Jeremy Smith’s portraits commence with psychological questionnaire of his subject (s). The questionnaire unpacks their psyche, exploring their dreams, goals, fears, familial influences, perception and even fabricated of self. Over months of drawing and reflecting, Smith draws a detailed psycho-geographic, narrative. For [i]Just Draw Jeremy presents a new portrait Art Nouveau Selt Portrait of Others. The subjects for the work, ‘Edward,’ ‘James,’ ‘Pia' and ‘Jesse’ are represented as a whimsical art nouveau city.

Jeremy Smith is a current Masters of Fine Arts by research candidate at the College of Fine Arts. His practice integrates highly detailed drawing, painting, etching and animation with cartographic conventions and psychology to create narratives that explore notions of the self. His work has won several awards in Sydney, including the Tim Olsen Drawing prize 2013 and the GBK award 2012. Jeremy’s work has been exhibited in multiple shows in Sydney and most recently in Hong Kong.