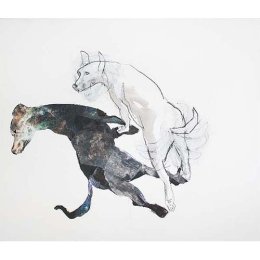 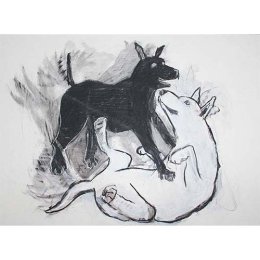 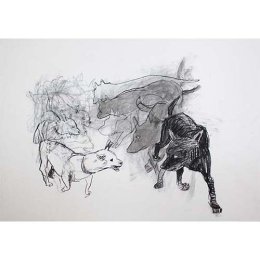 Since I was a child, drawing characters and their fictitious narratives has consumed me From constructing comic books, to fabricating elaborate soap operas with fabricated family trees, I have always found drawing and story telling to be intrinsically linked.

Todd Fuller uses animation to bring to life his character driven stories. His protagonists begin their life in as doddle in his sketchbook and the storyline grows from there. While the characters are conjured in his imagination they are based on fragments of real people and undeniably himself. His characters are often flawed, usually melancholy and lonely, but always hopeful. His characters have included: The Fat Man in a Tutu who fell in love with a miner, Men in Bunny Suits looking for unusual love, Men of Tin and the character shown here in Little Star.

“Zvezdochka’ (aka Little Star)* was one of the so called ‘Soviet Space Dogs’ used for sub-orbital and orbital space flights to determine whether human spaceflight was feasible. Todd’s characterisation of Little Star takes us on an imaginary (and very Australian) journey. The same journey many of us have made as we look forward an adventure with equal measures of eagerness and trepidation.

Todd Fuller (co-curator and participating artist) is a graduate of Sydney’s National Art School. His practice integrates sculpture, animation, drawing, performance and painting. Fuller was awarded the honourable mention at the 15th Asian Art Biennale, the William Fletcher fellow at the British Academy and a residency to the Cite International Des Art. He has exhibited at Canberra’s National Portraiture Gallery, Deakin University Gallery, won the Lloyd Rees Memorial Art Prize and been appointed Art Fellow at Sydney Grammar School. Fuller is currently Waverley Council’s curatorial and gallery assistant. Previous roles include Co-Director of Sculpture in the Vineyards from 2011-2014 and the Events, Education and Online Learning Coordinator for the 18th Biennale of Sydney. His first curatorial project; BLACK at Cessnock Regional Art Gallery, was supported through the Sidney Myer Curatorial Mentorship. Todd also curated the touring exhibition Scanlines with dLux MediaArts.

Todd will present his latest hand drawn animation "Little Star" along with works on paper and sculpture.