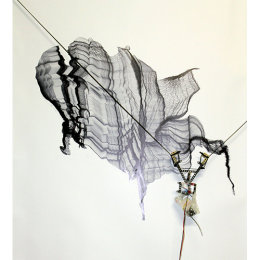 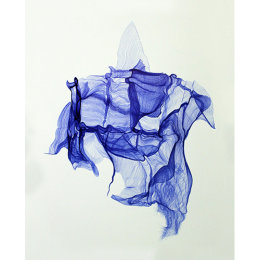 The robot’s motion sensor dangles on the end of a wire with a blinking LED, reminiscent of a deep sea angler fish. This lurking fish has a luminescent organ called the ‘esca’ used to attract both prey and mates. The robot’s sensor, like the fish, is constantly ‘fishing’ for movements from passersby. When there’s stillness the machine drifts, describing the void, waiting to be interrupted or to 'capture' the disruption from passers-by.

We naturally tend to assess and value an artwork based on the skill of the artist’s execution: how ‘well’ it was drawn and how highly developed the concept. Grant Stewart’s drawing robot forces us to consider what happens to an artwork’s value when the artist’s hand is removed and decision making is handed to chance. When first built, the drawing robot articulated on paper designs created by Grant using software. This latest incarnation has gained a sense of autonomy and intelligence. Just like a drawer analysing his or her subject, this robot is responds to the environment and the visitors occupying the gallery. The resulting drawing becomes an unpredictable articulation of the exhibition space and the visitors’ interactions with it.

Grant Stewart is a Sydney based artist working across robotics, new media, and traditional materials. His current practice examines how perceptions of beauty in art are linked with evolutionary displays of highly developed human skill and achievement. He uses programming and physical computing to produce simulations of human skill, and is interested in how this process changes our perception of the value and beauty of art. Grant is the inventor of the ‘Drawing Robot,’ a custom built hanging plotter with an Arduino, processing code, motors, wire and LEGO.