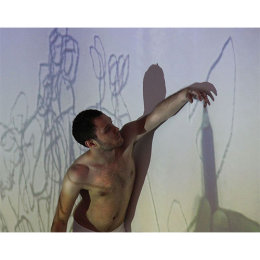 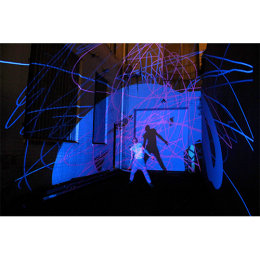 Flatline is a cross art-form collective which aims to transcend their respective forms of art and dance and in doing so create a hybrid interaction between the mediums. This dialogue is made possible through experimental and interactive technologies. From this conversation the pair have developed a new language while finding a niche between the art and dance world. Flatline has exhibited at Art Stages Singapore, the 16th Asian Art Biennale, produced a show at Riverside Theatre and was recently acquired from the Jacaranda Acquisitive Drawing Prize.

Imagine if when we moved, the remnants of our body in space were left behind: tracked in the air like a map of our motion.

imprint is a choreographed drawing, executed by a dancer wearing shoes dipped in melted crayons. The dancer follows a mapped series of movements, but those movements shift as the shoes crumble. The drawing maps the traces left behind by the scrape, stamp of the feet, those traces that we never see but are imprinted nonetheless.

Traditionally the artist has drawn the dancer the two disciplines while linked are rarely conjoined. The core of Flatline’s work is to seek out ways to fuse dance and art, movement and the drawn line.

Flatline's performance 'Imprint' and animated drawing 'A Dance for Paul Klee' will be on display for Just Draw.